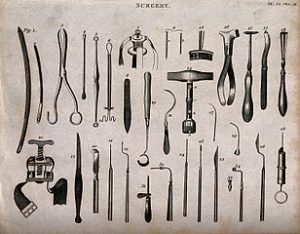 This scene brings Karen’s mind back to a medical examination, when the doctor recommended amputation, institutionalization, or euthanasia for her. In spite of her worries about her coming evaluation by the same physician, she vows to stay strong and not give in to people-pleasing. (Photo attribution: See page for author, CC BY 4.0, via Wikimedia Commons)

In her memory, she heard Dr. Lambert’s voice. She was seven years old and with her mother in the clinic room at school. Dr. Lambert towered over her. His huge stomach was at her eye-level. She watched it stretch the cloth of his gray striped dress shirt, as he wheezed for breath. He glared down at her and pulled his white doctor coat together over his belly, and then adjusted his gray tie and gray tie clip. Taller than the other men in the room, he was so overweight that he looked round. His gray hair lay in neat Brylcreem rows across his scalp, and whenever she saw the top of his head, droplets of sweat covered it. He pointed at her, and she saw the gray cuff links in his shirt cuffs.

The doctors had examined her and were reviewing the file on her academic progress. As always, Lambert’s voice was cold, as if he were trying to be as inhuman as possible. A medical doctor, he also had a PhD among the credentials that followed his name, but when she heard what he recommended, she knew that he was not there to help her fulfill her potential as a disabled person. He was there to prune her into a profitable imitation of normalcy.

“We don’t have much to work with, Mrs. Hirschstein. Your daughter is not progressing well, academically. She is probably not capable of academic progress beyond the rudiments, such as learning the alphabet. Her physical development is also very slow. I would recommend removing the paralyzed limbs, so that her body could put whatever energy it has into developing the normal limbs. This would help her become more normal. Perhaps it would free energy for her intellectual development, as well. You should also consider euthanasia. When the case is hopeless, there’s no shame in that. Or, there is always institutionalization. There are state institutions that would relieve you of the necessity of caring for her, and they would give her appropriate care for the rest of her life.”

Even at the age of seven, Kitten’s vocabulary included these words, and she knew exactly what he meant. Too frightened to speak, she was glad when her mother gasped, “Never!” before hurrying Karen out of the school and into the car for the ride home.

Euthanasia? Institutionalization? Give me a break, doctor! Who do you think you are? Do you think my life is worthless? Well, it’s not. I am only in second grade, and I am not dead, yet! And by the way, my mama and I are not going to allow any of you to chop up my little body like a piece of cake

Closing her eyes for a moment, she forced herself to swallow her last bite of food. She had seen many of her disabled classmates and their parents taken in by such deceit. It seemed impossible that such behavior could exist in the twentieth century, but it was alive and well in her world! These second-semester evaluations were all-important, and the doctors were subtle, their diagnoses and recommendations as deadly as a spider’s sparkling web. Nonetheless, her empowered thoughts eased her woes and were the opposite of people-pleasing.