In this scene, we learn the sad story of one of Kitten’s friends—a little boy who died because of medical malpractice, when he was only eight years old. But, instead of working herself into a rage, or worrying herself into panic, Karen recognizes that she not only needs to learn to stand up to the doctors, so they do not do something similar to her, but she needs to get past her worry and resentment. They can be as deadly as any human. Likewise, she finds inspiration in the Civil Rights Movement and vows to apply the same principles to the rights of people with disabilities.

The two pictures are of me as a little girl and me, today, speaking for and to people with disabilities. 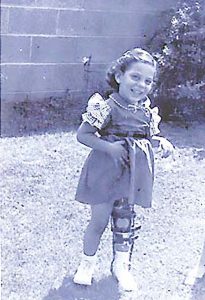 The author delivering a keynote address

Tears flowed from her closed eyelids, as she saw in memory a small boy, an eight-year-old, who had attended her school and had been a friend. He had cerebral palsy, like Kitten, but it affected the right side of his body rather than the left. His mind was completely normal and without any learning disabilities. He had a happy disposition and made the other children laugh with his jokes. Aside from his right leg dragging to the side, his gait was good, and he managed most tasks with his left hand.

She had missed him when he did not come to school for a week. When he returned, she was happy to see him, but then she saw what had happened to him. The doctors had performed surgery to improve the use of his right hand, but rather than improving it, they had made it worse.

It hung and swung with each step he took, trailing like a loose pendulum from his wrist. It looked completely unnatural, and he complained that it hurt.

He stopped laughing after that.

The next Monday, he did not return to school. When Karen asked her teacher what had happened to him, the teacher said he had developed a staph infection from the surgery and died.

Thinking back over the experience, Karen realized that the doctors had killed the boy in their greed, and that they could do the same to her. She had to be strong and stand up to them.

In a flash, she realized that she had never allowed herself to think like this before. She had never permitted herself to imagine being so bold, so assertive, or so brave. Her first walk to the carousel was where this bravery germinated. Now, she knew that this was her time. She knew that her disabilities were not accidents. She knew that this was her opportunity to teach others. She was not a Tiny Tim like she had read about in Dickens’ A Christmas Carol. She was not anyone’s inspiration to perfection. She was a smart, young girl who had something wonderful to offer the world, and that included the strength imparted by her cerebral palsy and perceptual disabilities! From Pegasus’ teaching, she had learned that the source of her energy and strength came from her accomplishments—even from the ones that seemed to be disasters rather than triumphs. She found empowerment in the sentiments, perceptions, and logic of her heart. These were direct results of her new sense of self.

She was not going to allow anyone to bully her into becoming an experimental subject for these self-important experts. She would maintain her human dignity and her pride in her disabilities. This was a new beginning. She would fight for her life like no one had ever fought before.

This Herculean cognizance had been locked deep within her being. Now, she felt it transforming her just as Pegasus had metamorphosed from a wooden fantasy horse into a living spiritual guide. At the same time, her new awareness brought her back to reality.

So many people are trying to change things. People are marching for Civil Rights and against pollution. I, too, must march for my dream of a world in which toxic and tainted thinking about people with disabilities won’t exist anymore. We won’t be judged by our disabilities anymore than by the color of our skin! With Pegasus by my side, I will present the world with a new view of cerebral palsy, with something fresh and not stereotypical!

Yet, as she cleaned the counter, her feelings of apprehension returned to gnaw at her—the experts were so much older and more powerful and better educated than she was. Perhaps, she could find something within herself that she could hide from them, something intangible but powerful. It had to be constructive and optimistic because that’s who she really was. She knew that, no matter how unenlightened the experts were, if she continued resenting and fearing them, her own anxiety would destroy her. She had to confront both her own feelings and the doctors.