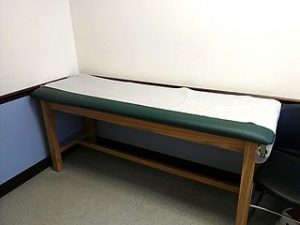 This scene shows little Karen in the classroom, trying to pull herself together, but in a daze of fear of the coming physical exam and evaluation.

She could not concentrate. She was miserably, ferociously preoccupied. Although her adrenal glands were in overdrive, her mind was in a stupor. The red second hand of the black-rimmed clock ticked the minutes away. She heard the teacher speak, but the words were meaningless.

What would the experts do to her? Would she have to perform for them, do exercises for them? She promised herself that she would take each minute as it came. She would maintain her composure. She would do whatever it took to get through clinic. She put her head down on the desk.

So much for living serenely in the here and now. Am I a failure at that, too? I want serenity, and I am trying my hardest, but I am just a kid!

For a moment, she retreated into her imagination and visualized herself riding on Pegasus in the sunshine and freedom of nature. As she rode in freedom and imagination, she felt her strength grow and knew it would sustain her through the afternoon.

With an existential jerk, she heaved herself back into reality. She knew she had just experienced the power of imagination that Pegasus had described a few hours before. That moment of freedom had been pure imagination. Yet, instead of being outdoors, in natural surroundings where she felt free, she was now in a classroom and would soon be on a table, undergoing an examination by experts. It would not be a place of beauty. It would be harsh and cold, a place where starched white coats looked down at her with commanding eyes and cold, intrusive hands.

The specialists would confer, command, and recommend. They would speak softly among themselves—not to her—as if she mattered not and could neither understand nor contribute to their discussion. When ready, they would announce their rulings without regard for her feelings. Their rulings would carry the weight of law in her life, but would have no consequences at all in the lives of the experts.