The day is ending. Mama and Rocky had promised to pick up Karen and Pegasus after the four o’clock parade, so the little girl and her horse watch the parade, and then head for the exit. Along the way, they recall some words of wisdom from the Disney movie Pinocchio. “When you wish upon a star…”

This song was originally written for the movie, but has since become a Disney icon, loved around the world. The words and music were by Ned Washington and Leigh Harline. They wrote the the words and music for Snow White and the Seven Dwarfs, too. Don’t you love these wonderful stories and their empowering messages? Here is a link to the Wikipedia article about Ned Washington and Leigh Harline: https://en.wikipedia.org/wiki/When_You_Wish_Upon_a_Star 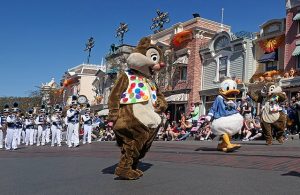 And, here is an image of what the parade might have looked like, as Disney characters marched to the tune of a brass band. Thanks to Bernard Spragg. NZ from Christchurch, New Zealand, CC0, via Wikimedia Commons for the photo.

When they reached the Disneyland Railroad Station, Karen looked up at the huge clock on the tower.

“Oh my goodness, Pegasus, it’s almost four o’clock. Mama said she and Rocky would pick us up after the four o’clock parade. Let’s go to the Town Square so we can see it go by.”

They hurried to the square and joined the crowd of excited children and families. After a few minutes, they heard music in the distance. A band played the theme song from the Mickey Mouse Club television show, and the music got louder.

Karen scrambled up into her saddle, and from there she could see over the heads of the people in the crowd.

“I see them, Pegasus! Mickey and Minnie and Donald and lots of other Disney characters are leading a marching band. And Cinderella is standing on a float behind the band.”

“Yes!” Pegasus said. “I can see it, now, too. Look at those beautiful horses!”

They watched in awe as their favorite Disney characters paraded to the tune of Disney songs. After a few minutes, the parade disappeared into the distance, and the crowd broke up.

Pegasus replied, “I especially liked seeing Jiminy Cricket. Can you guess why?”

Karen thought for a minute and then said, “I think so, boy.”

She took a deep breath and sang: