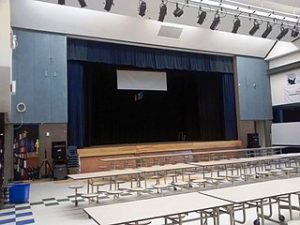 While Karen tries to find some peace by being alone in the ladies’ room, Mama does the same over a coffee in the cafetorium. New word for you? Think school auditorium with folding down tables and attached seating for lunches.

Scene 17: Mama in the Cafetorium

Meanwhile, Mama walked down the hall to the cafetorium. It was the largest room in the school. Folding tables with attached seats came down from the walls, when meals were served. The stage at one end was for school plays and performances. So, it was both the cafeteria and the auditorium.

She said hello to Mrs. Pearl and bought a cup of vanilla yoghurt for Kitten but only black coffee for herself. She was too fat. Maybe the caffeine would burn off a few calories.

There was an empty place at the end of one of the long tables. She took it so she could think. She needed help figuring out what kind of education Karen needed for her future. Karen needed to become a literate, well-read young lady, so she could succeed in college and a career. They had spent many evenings together, working on her basic reading skills, after the classroom teachers gave up. Principal Stephie had promised to hire a specialist teacher, who would be able to help, but the Child Study Team was useless. Dr. Lambert and the others were driven by greed for surgical fees and lust for power. They had spent the morning tormenting Karen so they could make their annual recommendation of experimental surgery. They would torment her more with insultingly simple intelligence tests in the afternoon. Then they would recommend that she continue the course of education they had prescribed in the past, even though it was not working. They were not even thinking about how Karen would support herself when she grew up.

Mama finished the black coffee and put down the cup. She wished she had said no to the second DPT shot, when her Krana Layala was a baby. Now, it was too late to change that, but how could she get her girl the education she needed?

Karen entered the cafetorium. Her forehead was pale, and her face was puffy from crying, but her cheeks were red like fire, red like the note Mama had written with her red hot lipstick, red like the words she had scribbled to the teacher about Karen needing homework that she could do by herself. Without saying a word, Karen hugged her and sat down.