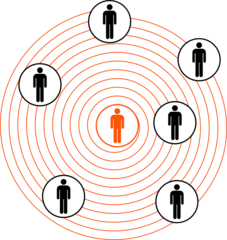 Chapter 20 is all about how psychological testing can go wrong, about how a psychologist’s prejudice against a child with disabilities can turn an evaluation into a trial, in which the psychologist is judge and jury, and the school then becomes the executioner. Fortunately, little Kitten handles it in stride and does not let it break her brave spirit. (Image by Unknown authorUnknown author, CC0, via Wikimedia Commons)

As the image of Mrs. Pinzetti faded from little Karen’s mind, the bus hit a bump and shook her out of her revery. Then she felt herself slipping back into the memory of another scene that had occurred near the end of the previous school term. Just as a dying person sees his life flash before his inner eye, Kitten recalled her recent psychological evaluation with Dr. Muñoz, the new school psychologist—the one dark day during the weeks after her move into the new house.

Quiet, quiet, the silent hallway had instructed her. Not a murmur, not a sound, not even a whisper through the cracks under the classroom doors—a silence free from all activity, except for the footsteps of Dr. Muñoz and Karen, footsteps that reverberated in Kitten’s ear canals, footsteps that reflected his tone and his polio.

“Come with me,” Dr. Muñoz said, as he glared down at her. He demonstrated by stretching out his arm, pointing his finger, pointing it sharply toward his cubby hole, straight down the hall. His starched white cuffs stretched beyond his black wool suit, and the glitter of his gold cufflinks emphasized the flourish of his hand.

He turned and strutted ahead of her, towering in his six-foot-two-inch body. His fine black suit was elegant, but why was it bulging at the bottom of one cuff? She saw flashes of metal, metal that looked like a brace, a piece of metal that resembled her leg brace.

Could it be? Karen asked herself. Yes, it could be.

“Come along. Come along, child,” he motioned and repeated in his deep voice and heavy accent.

His manicured fingernails caught Karen’s eyes, as their flash illuminated his every expressive motion with a reflected beam that blinded her sensitive visual perception like a lightning bolt. His words were respectful but his tone was harsh.

Karen fell in behind him, but his pace was faster than she could manage. She knew he would be annoyed when he looked back and saw her trailing far behind him. Every time she lifted one foot and set it in front of the other, she became more anxious than during the previous step. She was picking up on his energy and the way he was acting towards her. While she understood what was going on in the spiritual realm and in the physical realm, she was spiritually fighting the negativity that reached her through his actions and demeanor.

She sensed that Dr. Muñoz’s nerves were on edge, too, and this made her nerves flare, even though the evaluation had not yet begun. She felt the fibers that carried sensations to her brain begin to shut down. Fear crept through her nervous system like a fungus, setting off sparks that clouded her senses, as they ricocheted and misfired throughout her body, telling her that she was not relaxed and that she was definitely headed for a bout of severe transposition, which would assure low test scores.

He’s the psychologist. He’s got his degrees, already! Will he help me get mine, or will he label me something I’m not? Will he make me out to be more inferior than I truly am? I must stay positive. If I could handle Mrs. Schmidt and physical torture, I am sure I can handle a shrink with a bad attitude.

She quickened her pace and heard the hallway reverberate as her brace buckle banged against the bars of the brace on her leg.